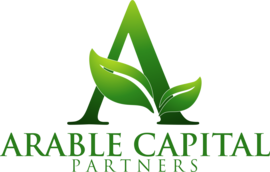 Arable Capital Partners is an agriculture investment firm that hired Hinton Creative to craft the company’s new website copy. Led by a team of agriculture and investing experts, Arable invests in food and agriculture companies in the Western U.S.—from simple seed and produce to cutting-edge farm equipment and packaged products.

“Lori produces strategic, thoughtful work, and is a pleasure to work with — always professional, kind and knowledgeable.”

Arable Capital Partners  is a relatively new firm with years of agriculture and investment experience. Poised with $300 million in capital commitments at the closing of it’s debut fund, the Arable team wanted to launch a modern website that not only explained the fairly complex process of what they do in a simple but way, but also harkened back to their roots and spoke to all generations of farmers.

Hinton Creative teamed up with DEI Creative to write the new site that demonstrated Arable’s progressive approach while illustrating the important point that this company understands family business culture and relies on local knowledge as well as face-to-face business practices to succeed.

Since the firm launched in August of 2017, Arable has acquired five agribusinesses with many more on the horizon.